“We have like five drummers here at Sugar,” says Jijo Reed, founder and CEO of Sugar Studios, talking about employees at his one-stop post-production house. It occupies three floors of L.A.’s Art Deco landmark the Wiltern Building, somewhere near the center of the indie film universe. 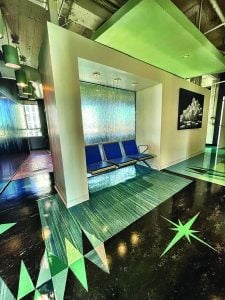 A film Sugar worked on that Reed is executive producing, Free LSD, will close this year’s Slamdance Film Festival. Another Sugar project, the Michael Polish-Kate Bosworth series Bring on the Dancing Horses, premiered last year at Sundance. In the fall, another film that Sugar did all the post on, The Blackening, premiered at the Toronto International Film Festival. Along the way, Sugar also worked on the Machine Gun Kelly Hulu documentary Life in Pink.

Reed’s studio has 12 edit bays, two color suites, four sound rooms, and a 20-seat Dolby Atmos theater for mixing and theatrical color grading. In an industry known for outsourcing and frustratingly piecemeal post production, Sugar stands out as a unified location for everything from editing to color, sound, VFX and delivery. It also happens to be a fun place to work, collaborate and hang out.

“Most filmmakers have to go to maybe Burbank for the audio, the Westside for color, somewhere else for visual effects — which definitely affects the creative process and the efficiency of these films, especially with films that don’t have an endless supply of funds,” Reed says. “We want people to realize the convenience of our model goes hand-in-hand with top-level quality.”

So why all the drummers? “It’s all about rhythm,” he says. “The pacing of a cut, the flow of the content. Most of the best editors have a rhythmic sense. I find with our artists who have a talent with rhythm and timing, there’s a certain flow, a certain smoothness — that rhythm that really makes these cuts feel right, you know? Everything is about the beat.”

Reed’s story has all the beats of the best rock ’n’ roll biopics — swanky, 1950s decor, a fast rise, addiction, even a Ferrari crash. And then a comeback — to the biggest success yet — built on a love for the core artistry that got him started. It all begins in the 1980s, in Studio City, where Reed was part of the psychobilly or punkabilly scene, a mashup of punk and rockabilly. “I was really into the ‘50s aesthetic, you know? ’50s cars, ’50s clothes. I used to go to the Palomino and all these clubs in L.A. that used to have these rockabilly and punk bands,” he says. “Since I was 14 or 15, I was always drawn to the aesthetics of that era — the lines and the colors and the purity of it, in just the streamlined aspects.” 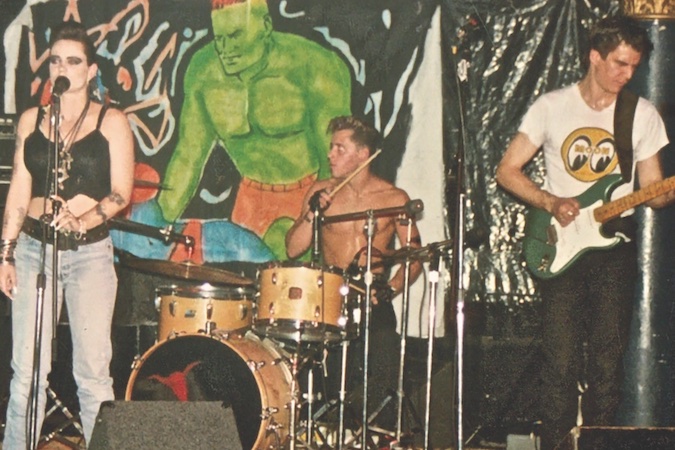 He has tweaked and evolved the aesthetic, but never abandoned it. “I’d always shop at flea markets,” he says. “I’d have ’50s doggy-bone couches and tweed chairs and ceramic ashtrays and glass grapes.” Now his offices are decorated in seafoam mid-century and retro deco that fits perfectly with the aesthetic of the Wiltern. Sugar’s logo is the first tipoff to his tastes. “I told my wife when I was designing the logo that I wanted it to look like old-school sleazy Vegas combined with the emblem on a low-rent North Hollywood duplex.” 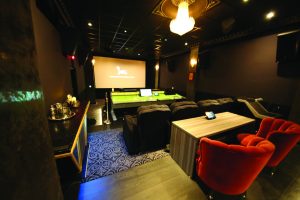 Reed played in two bands as a teenager, The Hellcats and the Bobbi Brat Band. As he did shows around L.A., he caught the eye of a casting agent who liked his looks, and had him audition for commercials and films.

“So I had a short stint trying to be an actor. And like most actors in LA, I needed a real job. I worked as a waiter at Jerry’s Deli, in Studio City, and then a friend of mine said, ‘Hey, do you want a real job?’”

It was 1989, and the job was as a driver for a company that made movie trailers. He started off shuttling tapes back and forth to studios, then became an assistant, and then an assistant editor and finisher — the person who packages everything together to make it beautiful. He became very adept at the technical aspects of the job then eventually became a creative producer.

The company he worked for, The Cimarron Group, did the trailers for now-classic films including Terminator 2, The Unforgiven, and Casino. He remembers the last one especially well — because it perfectly encapsulates the creativity involved in cutting a great trailer.

As he recalls it, three trailer companies were in competition for the Martin Scorsese film, and all of their trailers included the famous car explosion that appears near the beginning and ending of the film. But one thing made his company stand out: some creative recontextualizing of a line that Robert De Niro’s character, Sam “Ace” Rothstein, coolly delivers to his wife, Ginger (Sharon Stone), after he hears her plotting in their home to get rid of him.

“At the very end, after the explosion, we cut to him — a nice beautiful shot of him looking over the floor of the Tangiers Casino, and we just hear the dialogue: ‘You want to get rid of me? Here I am. Go ahead, get rid of me,’” Reed recalls. “You put those two together and it created this magical ending for that trailer. So we ended up getting that campaign, and I get to say that I worked on that trailer.”

His attention to detail is obvious in the way he recalls the bakeoff. He only tells the story after some prodding from me, a huge Casino fan. Though he worked on it 27 years ago, and it’s one of countless trailers he had a hand in, when I watch it later on YouTube it’s exactly as Reed remembers it:

He kept rising in the trailer business, and eventually became an executive producer at L.A.’s Union Editorial, and then the owner of The Division Media, handling feature films, television, new media, and more. Things looked, from the outside, to be going great. He even had a Ferrari.

Also Read: Michael B. Jordan Has Starred in Huge Movies. Now It’s Time to Make One With Creed III

But not all was good. “I really took a downward spiral into drugs and alcohol,” he says. He could have left this part out, but he decided to share it, near the end of our interview. Because maybe hearing about it will help someone else. He remembers that he used to tell himself he needed drugs and booze to handle his workload. 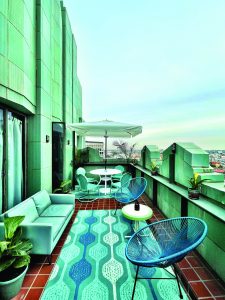 The penthouse balcony at Sugar Studios, courtesy of Jijo Reed

“It’s funny that my mind would tell me that the work was necessitating me staying up late. So therefore, I would need some help staying up late,” he laughs. “But really, it was my need to stay up late and do drugs that made me work late.” He had a moment of clarity at a party. “Someone came up to me and said, ‘Oh yeah. Didn’t you used to be a producer?’ And in my mind, I thought I still was — but I wasn’t. I was off the grid,” he says. “I had the cliche experience of a reckless ‘Hollywood producer’: My marriage ended, my career ended, the Ferrari crashed.”

He went to rehab, and spent six months getting healthy again. And then he started over. “2012 is when I leased a small office at the Wiltern. I had a laptop and a hard drive that I got from Fry’s for $120 and a monitor,” he recalls.

“I taught myself Final Cut Pro on my laptop and started cutting trailers in this little office on the ninth floor at the Wiltern.” For 10 years, with his wife Nicole in the role of COO, they built Sugar, bigger and better.

“Every time I got a job, I would buy more equipment, and I hired some interns who became staff employees, and just kept going.”

In 2013, he started focusing on full feature post production. Among his successes since then are winning a regional Emmy for the 2019 documentary Breathe, Nolan, Breathe. “So in the last 10 years, we went from a small office on the ninth floor to overtaking the entire eighth and ninth floor and the spectacular 12th-floor penthouse,” he says.

As we talk, he gets an email from a major producer — a name you would recognize — referring a filmmaker to Sugar.

“Ninety-five percent of our business is from either referrals or repeat clients,” says Reed.

Bring on the Dancing Horses is the fourth Michael Polish project that Sugar has worked on, and Paul Buhl, the lead editor on the show, has a long professional relationship with the writer-director. Polish and Bosworth, the show’s star, believed in it so much that they financed all 10 episodes of the series independently before looking for a network or streamer. (Expect an announcement soon.) 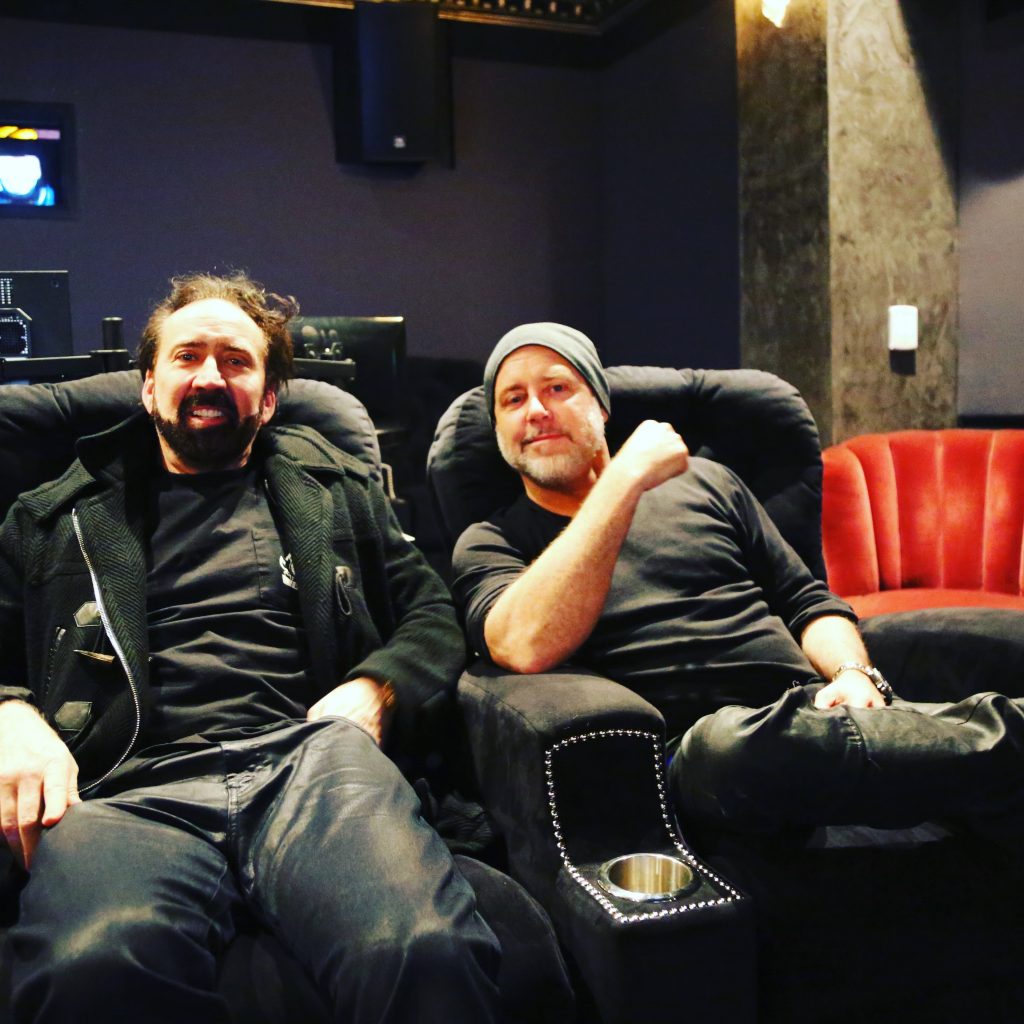 Another Sugar project is Cinnamon, from filmmaker Bryian Keith Montgomery Jr., which features Pam Grier and Damon Wayans. It’s being produced by Village Roadshow Pictures under a deal to produce several “Black Noir Cinema” films. Village Roadshow is one of many businesses moving into more modestly budgeted productions — and Sugar Studios is perfectly positioned to help them, thanks to its unique, streamlined process.

“They’re pleasantly surprised, and in some cases astounded, by the quality that they can get at that budget level,” Reed says. Free LSD will bring Reed full circle: It features some of the punk icons, like the late Dead Kennedys drummer DH Peligro and Circle Jerks singer Keith Morris, who he looked up to as a kid. He first met Morris when his band opened for the Circle Jerks in 1986.

“Kind of my punk rock heroes, you know?”

You can learn more about Sugar Studios at sugarstudiosla.com.

take guns out of movies after Rust death