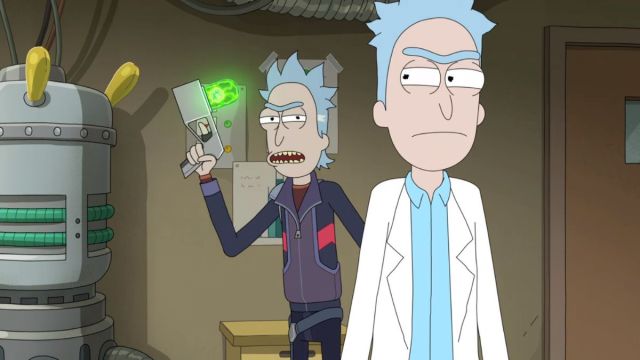 Season six of Rick and Morty left viewers on a cliffhanger and sent them back to where the season started. Rather than seeing Rick Sanchez move on and bond with his family, it was revealed that he was finding out that he’s still trying to hunt down his arch-nemesis, Rick Prime. This led fans to theorize ways to take down the show’s newest big bad.

Over on r/RickAndMorty, fans came together to figure out ways to defeat the man that killed his wife, Diane. Various ideas came to mind like finding a “Prime Diane.” Meanwhile, others suggested getting other “prime” characters like “Prime Mister Nimbus” or other entities like Mr. Fundles or Flamingo Dad. But there was one answer that got this discussion to a standstill… literally.

Reddit user u/mpakaliaroskordalia replied to the post with “Justin Roiland’s DM,” referencing the recent controversy where the show’s creator DM’s were leaked, containing vile messages towards young women. Similar comments popped up such as “domestic violence charges”, court cases against the voice actor, and anything referencing the recent allegations Roiland currently faces.

Unfortunately, the Reddit mods locked the comments for this particular Reddit thread. The moderators of the show’s subreddit were accused by Reddit users of sweeping the recent controversy under the rug. Most of the answers in the comments were based on the show’s characters. But the fact that Roiland’s alleged accusations were mentioned may be the cause for the thread’s closure.

While the Roiland controversy was somewhat of a meta answer to defeat Prime Rick, it might be the saddest and most plausible answer to stop the show’s big bad once and for all. It’s currently unknown if the show will receive a seventh season. If it does, it will be interesting to see what happens to Rick’s voice actor in future episodes.

If you are experiencing domestic abuse, or if you believe someone you know is being abused, contact The National Domestic Violence Hotline. The hotline can be reached at 1-800-799-SAFE or spoken with online via the hotline’s website. Mobile phone owners can also text “START” to the number 88788.