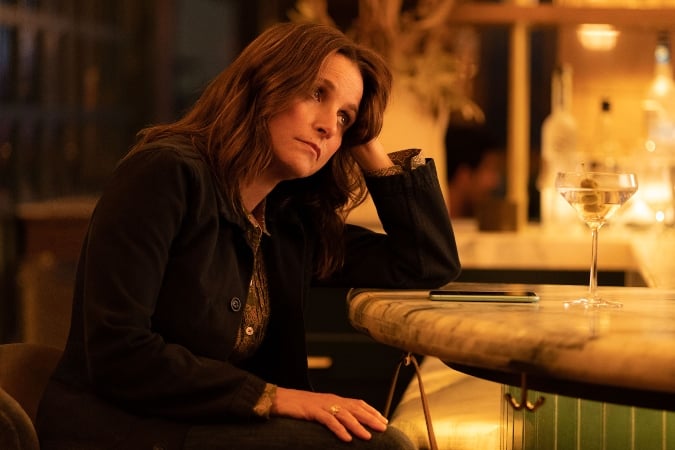 You Hurt My Feelings star Julia Louis-Dreyfus says what drew her to the movie, besides a reunion with Enough Said director Nicole Holofcener, was that the story is a small thing wrapped up inside a much bigger thing.

“First and foremost, working with Nicole Holofcener again as a writer and a director is irresistible, of course,” Louis-Dreyfus said on Sunday at the world premiere of You Hurt My Feelings at the 2023 Sundance Film Festival. “When Nicole and I had lunch one day, and she told me about this premise that she had been thinking about. And as soon as she told me that premise, and I’m like, ‘Yeah, I’m doing this movie.”

“It’s a very small thing about a very big thing. And that was what was appealing to me about it,” Dreyfus added.

The story follows Louis-Dreyfus’ character Beth, a New York novelist whose world is shattered when she overhears her devoted and adoring husband Don (Tobias Menzies) trash-talking the manuscript that she’s been working on for years. Throughout the film, characters grapple with an essential question: is it okay to tell a white lie in order to protect your partner’s feelings?

Menzies, who notably played Prince Philip in seasons 3 and 4 of The Crown, also reflected on the positive experience working with Holofcener.

“I like Nicole’s brain, really. I like how she looks at the world and thinks about it. Doing this film was a chance to hang out in a corner of her brain for a bit. It’s quite a fun place to hang out,” he said.

“Not for me,” Holofcener joked, which got a big laugh from the crowd.

Holofcener was excited to reunite with Louis-Dreyfus after Enough Said, which they made in 2013 co-starring the late, great James Gandolfini.

“After Enough Said, I really wanted to work with her again — we wanted to work together again. And so I kept trying to think of an idea for us to do,” Holofcener said. “And she said ‘Okay,’ so I’m so happy. We had such a good time the first time and we had a great time the second time too. So it’s really fun.”

So, does Holofcener believe in radical honesty or telling the occasional, well-meaning white lie?

“I guess that’s what I’m exploring,” she said. “And I’m not sure. I mean, when is it right to tell the truth and when is right to tell a white lie? How much to encourage and support, even if you don’t like the thing but you love them? I mean, they’re just questions that I thought were interesting my whole life. And so I wrote it.”

“I actually think you should always tell them the truth and never not tell the truth,” Louis-Dreyfus said sarcastically, getting another big laugh from the crowd.

Main Image: A still from You Hurt My Feelings starring Julia Louis-Dreyfus directed by Nicole Holofcener, an official selection of the Premieres program at the 2023 Sundance Film Festival. Courtesy of Sundance Institute.

10 Actresses Snubbed By The 2023 Oscar Nominations