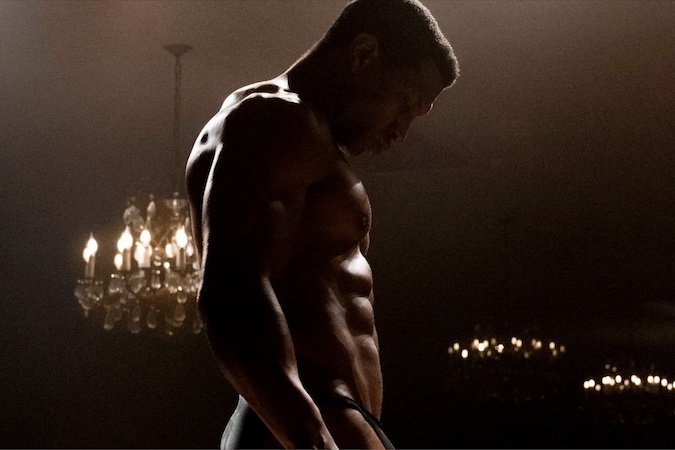 The film, which just premiered at the Sundance Film Festival, is the second feature to be written and directed by the impressive Elijah Bynum. It follows Killian Maddox, an amateur athlete with no team, backing, sponsorship or encouragement of any kind, except from his Vietnam veteran grandfather, William Lattimore (Harrison Page). His life consists of punishing workouts, bad-idea injections, invisible shifts at a grocery store, and court-mandated meetings with a counselor (Harriet Sansom Harris). He watches porn, dispassionately, while eating, and takes an awkward interest in a grocery store-colleague named Jessie (Haley Bennet), while maintaining a one-way correspondence with champion bodybuilder Brad Vanderhorn (Mike O’Hearn). His dream is to appear in a fitness magazine photo spread like the ones that paper his bedroom wall.

Killian has a single-minded focus that could also be taken for emptiness. But what seems like vacuousness may also be a quietly heroic effort to keep his explosive temper in check. As a 6’1, very muscular Black man in America, he is often seen by the white people around him as a threat — which places him in danger. He knows that at his smallest flash of anger, smaller men will be overzealous in their efforts to contain him.

Killian’s supreme physical power is matched by a surprising lack of confidence. Bynum wincingly and convincingly helps us understand why, without being didactic or overly expository. We just hang out with Killian, growing to understand and root for him, noticing little details Bynum never oversells. (Killian always dresses nicely, more nicely than he needs to — is it just to impress  Jessie? Or to put the white people at ease?)

Several scenes recall Robert De Niro’s turns as isolated cabbie Travis Bickle in Taxi Driver or aspiring comedian Rupert Pupkin in King of Comedy, two of the all-time performances in screen history. Time will tell if Majors’ performance achieves their recognition, but I’m hard-pressed to think of anything he could have done better with his role. If Joaquin Phoenix deserved an Oscar for Joker, Jonathan Majors surely deserves one for the more nuanced, believable and moving performance in Magazine Dreams. If the film gets any kind of audience at all, it’s hard to fathom anyone else wining Best Actor at the 2024 awards, when he’ll be eligible.

I never make these kinds of predictions, by the way, and if this one seems premature, well, see the movie. (It’s getting lots of buzz at Sundance, so expect word on a distribution plan soon.) Majors’ upcoming performances in Ant-Man and the Wasp: Quantumania and Creed III should secure his status as a movie star, in an era where they supposedly don’t exist anymore.

Majors’ physical commitment to the role is one of the most impressive I’ve seen (think De Niro’s transformation within Raging Bull, or Christian Bale’s shocking swings from American Psycho to The Machinist to Batman Begins to American Hustle). Becoming Killian Maddox required the already muscular actor to shred himself to the outrageous standards of bodybuilding, working out three times a day and consuming 6,100 calories daily for four months. If you consider working out to play a character part of acting — I sure do — he’s in Oscar contention just for the way he looks onscreen.

But his emotional control is even more impressive. Killian Maddox is an incredible character I can’t imagine anyone else bringing to life: He swings from admirable and intensely dedicated to terrifyingly out-of-control to sweetly shy and naive. A late-in-the-game appearance by the always-excellent Taylour Paige offers more insights into his true self.