Brandon Cronenberg’s Infinity Pool isn’t for the faint of heart, but if you like your genre films rough, this is right up your alley.

PLOT: A tourist (Alexander Skarsgard) visiting an unstable, totalitarian country accidentally kills someone in an auto accident. He’s sentenced to death but discovers that he can have a clone made to take his place for the right price. Soon, he falls in with a maniacal group of affluent tourists who’ve taken advantage of this fact to engage in wild acts of hedonism and violence.

REVIEW: To say Infinity Pool is not for the faint of heart is an understatement. One could have said the same thing about director Brandon Cronenberg’s last movie, Possessor, but the extreme violence and sex on display here go beyond anything shown in that film. Those who catch it in theaters when it opens this week may not understand why the film is so controversial, but that’s because those audiences will be seeing a censored, R-rated cut. The version we got at Sundance, which will eventually be released on VOD/streaming, is the cut initially slapped with an NC-17 from the MPAA. One imagines the scenes the MPAA gave Cronenberg grief over have more to do with the explicit sexuality rather than the graphic violence, but I digress.

It’s a provocative work that’s as disturbing as anything from Brandon’s father, the great David Cronenberg. He’s a chip off the old block when it comes to depicting the depths of human depravity, although he avoids too much in the way of body horror. While he’ll inevitably be lumped in with his father, Cronenberg has always done his own thing, with a major contrast between the two being their visuals and music. David Cronenberg’s movies are usually shot to (intentionally) look austere, with classical scores by Howard Shore. By contrast, Brandon, with his DP Karim Hussein, goes for a slicker, more stylized look with hypnotic music by ambient musician Tin Hecker.

As far as depravity goes, there’s a whole lot of it on display. Alexander Skarsgard plays a failed novelist on vacation with his wealthy wife (Cleopatra Coleman), who subtly mocks him for his utter failure as an author. He’s an easy mark for the libertine couple in this, who Jalil Lespert plays, and, in a tour-de-force performance, Mia Goth at her most deliciously unhinged.

Once the film’s hook comes into play, Infinity Pool ventures into pretty cerebral sci-fi territory, would you take advantage of this fact if you could do whatever you wanted and have a clone pay for your misdeeds? Even if the clone has all your memories and is, essentially, you? Cronenberg’s film presents a group that takes delight in not having to obey any law or sense of morality, with the notion that they would become monsters once freed of consequences.

It adds up to a highly compelling piece of science fiction with enough gore to satisfy horror fans. Beautifully shot in Croatia, it’s masterfully made, and if Possessor hasn’t already established Brandon Cronenberg as a significant new player in the genre world, this will.

Alexander Skarsgard is terrific as the vacuous, the ultimately amoral protagonist. He plays a role in stark contrast to how he looks. His physical stature and looks are a mask for his character’s utter lack of scruples and courage. He’s fantastic in it, but Mia Goth totally steals the show as the unhinged Gabi. Goth is like the female Nicolas Cage in how she’s a maximalist. She doesn’t underplay a role and is the perfect choice to play the alluring and terrifying Gabi. She and Skarsgård are the movie’s focus, but Coleman, in a more minor role, brings some much-needed humanity to the film. That said, she’s the only one whose character could be called humane.

Infinity Pool will undoubtedly be a love-it-or-hate-it kind of movie, and it will no doubt be too much for a big chunk of folks. However, for those who like to push the limits regarding this kind of thing, Cronenberg delivered a future midnight movie classic. Hopefully, the R-rated cut will only lessen the film’s impact a little because even though it’s going out censored, it deserves to be seen on a big screen. 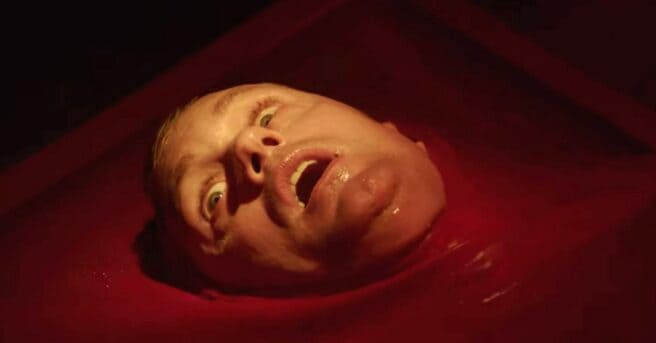 How Many Young Avengers Could There Be?

Jaws, The Last of Us, The Lion King, Star Wars, The Whale

The Two Towers’ Most Underrated Scene Isn’t What You Think