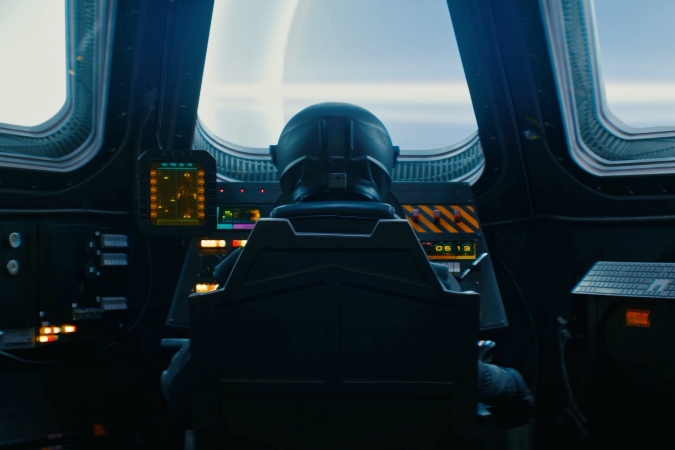 Many directors struggle to bring their vision to life because they can’t find or afford the perfect visual effects person. But Zechariah Thormodsgaard doesn’t have that problem — the director and producer of a new sci-fi short called “Convergence” does his own. In fact, he even owns a motion design and visual effects company called Gaardhouse.

Thormodsgaard left college 15 years ago to start his business. These days, Thormodsgaard produces movies through Gaardhouse, which has grown into a destination for VFX projects in ads, film, and television, with clients including Netflix, Amazon Studios, Universal Pictures, Paramount, NBCUniversal, and Disney.

The Minnesota-based producer and director of “Convergence” was able to do all his own visual effects on the sci-fi short film, which tells the story of an astronaut who encounters alternate realities while trying to save the world from a deep space anomaly.

When he first read Matthew Wilkins’ script for the sci-fi short, he knew he had to be a part of it. It was the perfect project for a guy who loves space — and who specializes in the kind of behind-the-scenes work that makes the actors look like they’re actually there.

“He sent me a draft and I read it and called him the minute I got done with the last line and said, ‘I don’t care what it is, I want to be a part of this. I’ll PA. I want to make sure this gets made,’” Thormodsgaard said.

He ended up taking on a much bigger role than a production assistant, ultimately signing on as a director and producing all the visual effects through his Gaardhouse team.

Through the company, Thormodsgaard also produced the 2022 cryptocurrency crime drama Bitcon, directed by Matt Osterman and starring Lost‘s Jeremy Davies, and The Infernal Machine, a mystery thriller about a reclusive author directed by Andrew Hunt and starring The Hurt Locker‘s Guy Pearce. On his own, Thormodsgaard also produced a 2020 short film about the Minnesota wilderness called “This Wild Land.”

Also Read: Gerard Butler Got ‘The Nicest Email’ From Robert Downey Jr. About Olympus Has Fallen

“Convergence” marks Thormodsgaard’s first time back in the director’s chair since his 2012 debut short, “SaddleBag.”  “Convergence” follows Jason (Anthony Caldwell), an astronaut who experiences the convergence of multiple realities as he approaches a deep space anomaly that threatens to destroy the earth if he doesn’t travel past the event horizon and detonate a dark matter bomb. The short also stars Eric Roberts as Jason’s highly critical father and Alix Angelis as Alex, Jason’s soulmate in every reality.

So far, “Convergence” has been doing well on its festival run, having won Best of Fest at Minneapolis St. Paul International Film Festival and Best Sci-Fi Short at FilmQuest, where it was also nominated for best score, best editing, best VFX, and best actor for star Anthony Caldwell. Caldwell’s Barabe Films also produced “Convergence” alongside Ten1 Entertainment with producer Jelena Nik Producer and executive producer Frey Dagne, who also acts in the film.

Thormodsgaard and his team at Gaardhouse aren’t based in Hollywood — instead, they live among a thriving, tight-knit community of filmmakers in St. Paul, Minnesota, home to the Minneapolis-St. Paul International Film Festival and the Twin Cities Film Fest. Bitcon was shot entirely in Minnesota, and Infernal Machine had reshoots and post-production done in the state.

“Everybody helps each other on their projects. It’s pretty great,” Thormodsgaard says of his community.

Thormodsgaard took after his grandfather when he became a filmmaker. , Curt Thormodsgaard was the director of photography and the interpreter on the set of the early 1970s documentary The Book That Would Not Burn, which tells the story of Madagascar and its people.

“Not only was it the first film to be entirely in Malagasy, but also the first to have Malagasy people as leads in the film,” Thormodsgaard said. “Apparently, and I’m just learning this today, my dad assisted in location scouting and casting, and my grandma did wardrobe and makeup.”

He says learning from his grandfather and his aunt Julie Thormodsgaard, a documentarian who’s been working on a film for several years, inspired him to begin his own career in film.

“I was very fortunate to get to hear his perspective from a young age, get to see his camera equipment and learn from him,” he says of his grandfather.

Among Thormodsgaard’s future goals is to make a feature version of “Convergence.” He and his team are already working on the script and making plans to pitch it in the coming months.

“The goal is to get that into production this year even,” he says. “We’re excited about that project and the prospect of getting that going.”

Watch the trailer for “Convergence” and learn more about the filmmakers on the short film’s website here.

Main Image: A still from “Convergence” courtesy of Zechariah Thormodsgaard.

‘Fair Play’ Offers a Scathing Takedown of the Aggressively Insecure

Riley Keough Is the Queen of Morally Ambiguous Characters

‘Shazam! Fury of the Gods’ Director Responds to Trailer Complaints