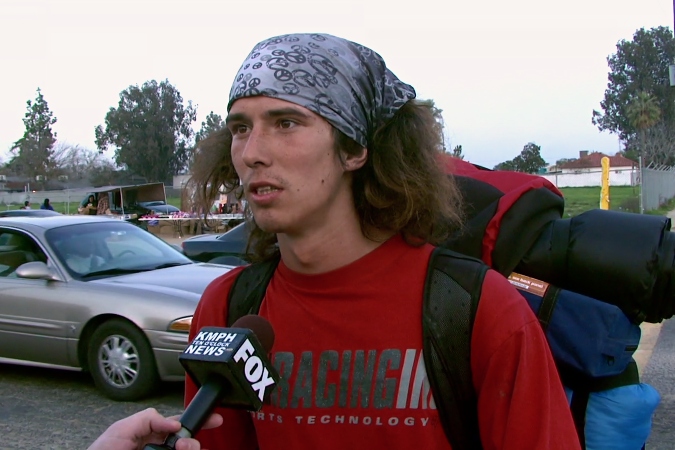 Netflix’s latest true crime documentary The Hatchet Wielding Hitchhiker delves deep into the strange and tragic life story of Caleb “Kai” Lawrence McGillvary, a man who rose to internet stardom after an interview he gave on a local Fresno news station went viral in 2013. But it only mentions in passing the story of Jett McBride, the man who picked up McGillvary when he was hitchhiking in February 2013, and who was arrested for driving his car into a utility worker.

If he hadn’t met McBride, McGillvary might never have risen to fame — because it was on McBride that McGillvary wielded his famous hatchet.

On that February day in 2013, McGillvary was sitting in the back seat when McBride drove into a parked utility vehicle, pinning a utility worker between the two cars.

According to McGillvary’s statements about the incident in the Netflix documentary, he had smoked a marijuana joint with McBride and the two were under the influence when McBride began claiming that he was Jesus Christ, uttering racist statements against the Black community, and suggesting that he could drive straight through a utility vehicle on the side of the road. After the crash, McGillvary said a woman rushed over to the car and was trying to help them when McBride got out of the car and began to physically attack the woman.

But McBride’s attorney at the time, Scott Baly, offers another perspective on his former client.

Speaking to MovieMaker, Baly first suggested a correction about a piece of information in The Hatchet Wielding Hitchhiker. He says a statement shown at the end of the documentary saying that McBride was “found guilty of assault with a deadly weapon and sentenced to nine years in a mental health facility” was incorrect.

Also Read: 7 Things You Might Not Know About Kai The Hatchet Wielding Hitchhiker

“The nine-year thing was inaccurate,” he told MovieMaker. “If they had asked me, I would have said, ‘Don’t say that.’”

He clarified that McBride was found not guilty by reason of insanity, and that he was ordered to spend time at Atascadero State Hospital, but that he ultimately only served approximately four to five years. Though Baly couldn’t recall exactly when McBride was released back into society, he believes he was out by 2019. He also confirmed that McBride is currently a free man.

We asked Baly whether he believes that McGillvary may have laced the marijuana joint that he and McBride shared. In the documentary, a musician who performed at a show with McGillvary says that he heard McGillvary claim to have given McBride a marijuana joint laced with stronger drugs on the day he hitchhiked with him.

“I doubt it’s true,” Baly said. “Anything’s possible. The trouble is, anything he [McGillvary] says is just unreliable.”

Baly also shared some more background on McBride and McGillvary’s drive before they encountered the utility worker.

“As I recall, they had been driving through Bakersfield and they stopped to get gas and Caleb was able to secure the marijuana from a person selling the joint very quickly, very easily. I think that Jett provided cash of $20 or something to get the joint and Caleb was the one that was able to buy it,” Baly said.

“They did pull over to smoke it at some point, and from all descriptions, they did feel pretty high. Whether he laced it — I mean, he could have laced it,” he added. “It’s one of those things that’s possible. But they did seem pretty stoned, I guess more than you would expect, because the way McBride — the effect it had on McBride was not insignificant. He was quite out of character and his behavior was quite bizarre that day.”

To be clear, the documentary notes that tests were done on McBride after the incident and they did not indicate the presence of any other drug in his system that day besides marijuana.

“McBride was an interesting guy. He was able to be — he was employed at times. He was a productive dude, but had undiagnosed mental illness,” Baly said. “We never saw that he had been held before, 5150’d before, or ever been involved in anything to this extent.”

Also Read: So Why Did Kai the Hatchet Wielding Hitchhiker Have a Hatchet, Anyway?

He believes that McBride’s mental health diagnosis at the time of the incident with McGillvary was bipolar disorder.

“Even when he presented himself in court, he presented himself well, but he had some bizarre belief system — he talked about being watched in a strange way,” Baly said. “Even though he’s trying to present himself as a sane fellow, stuff kind of comes through the cracks. You could see it there.”

He believes McBride really was suffering from a mental disorder when he hit the utility worker.

“By the time we got to the end, it looked quite real — that he wasn’t faking it, he wasn’t making it up,” Baly said.

Baly also said that McBride’s claim that he was Jesus Christ is “a pretty common delusion for people suffering from psychosis.”

But he doesn’t believe McBride to be a bad person, and noted that he displayed quite a bit of remorse at his trial for hitting the utility worker. He also said McBride disputed having targeted the utility worker because of his race, and insisted that he hadn’t seen him when he hit him with his car.

“I remember at the [prelimary hearing] and again at the trial, when he saw the PG&E worker as he left and he saw him in a wheelchair, McBride kind of cried, and he said, ‘I’m so sorry,’” Baly recalled.

So where is McBride today? Baly doesn’t know.

“He’s a good guy. I talked to him on the phone a couple years ago,” he said. But Baly has “no idea where he is” now — just that his case is now closed.

The Hatchet Wielding Hitchhiker is now streaming on Netflix.

Caleb “Kai” Lawrence McGillvary giving an interview after hitchhiking with Jett McBride in 2013. Courtesy of Netflix.

Dave Bautista Says His Dreams of Playing Bane Are Dead

Amy Explains The Hardest Part of Having Two Sons

Dave Bautista on James Gunn Rebooting the DCU, Why He Won’t Play Bane

Showtime rebrands as Paramount+ With Showtime