If you didn’t know Jethica was made for less than $10,000, you’d never guess. Since its debut at SXSW, the horror film from writer-director-cinematographer Pete Ohs has impressed audiences with its audacity, sweep and confident genre-bending. And it all started with an Airbnb search.

“After setting the slider on Airbnb to under $100, I found this trailer on a ranch in New Mexico,” Ohs recalls. “The pictures were so cinematic that I immediately felt this middle-of-nowhere location had some narrative juice…with any movie I make, there has to be some element of the fantastical. So I was like, ‘Okay, New Mexico, aliens are kind of obvious — how about ghosts?

Also Read: How Alex and Alina Willemin Made the Period Piece Albert and Claude for Under $30,000

“I started telling these ideas to all my actor friends I’d been envisioning as characters in the movie, and through these conversations the story started to develop into an outline. And that’s what we went to New Mexico with. We shot the movie in order and really just wrote the scenes as we went…I think the evolving tone of the movie was very much a product of that process. It was a really exciting way for me to make a movie, and a way to collaborate with these other people and just see what things we could discover.” 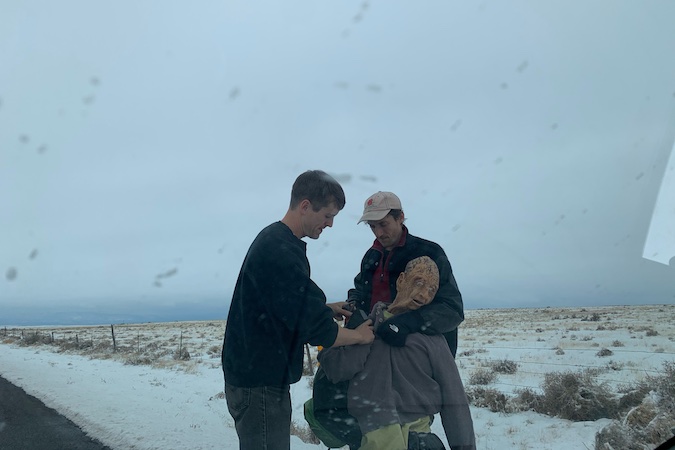 The film, which arrives in theaters Friday, follows Elena (Callie Hernandez) and her old friend Jessica (Ashley Denise Robinson), with whom she is newly reunited in New Mexico. Jessica explains that she has a stalker named Kevin (Will Madden). She believes he’s out of the picture — but then he seems to be back. To say more might ruin some of the twists and surprises in the 70-minute mix of supernatural horror and dark comedy that is also a quietly effective story of isolation and human relationships.

Jethica is a Southwestern Gothic where lost souls wander empty highways, and rituals are performed in the terrifying vastness of the desert. Rather than pouring money into jump scares and CGI, Ohs pulled inspiration from nature — and the challenges of low-budget filmmaking.

“The way this was able to be so cheap is, you know, I’m the whole crew. It’s just me and the actors,” Ohs explains. “And because it was made for so cheap, those low stakes… really allowed the five of us the space to just focus on the characters and the movie. We were engaged in nothing but the story, and that helped everything become that much richer.”

Instead of spending money on expensive costumes, the Jethica cast would go to New Mexico thrift stores and shop “in-character,” allowing them to better learn about their characters in the process. Ghostly actors did their own makeup, and the makeup evolved with their performances. 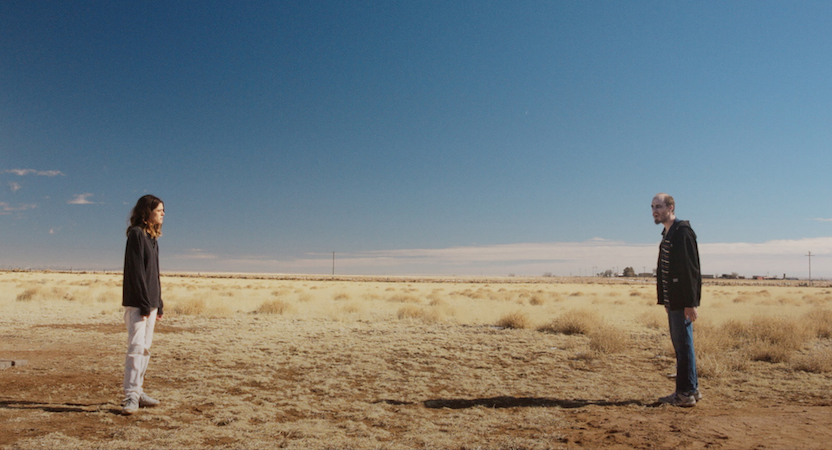 Callie Hernandez and Will Madden in Jethica, directed by Pete Ohs

“Yeah, their makeup kind of gets darker as the movie goes on,” Ohs laughs. “We all realized that one of our actors was just getting better at it, and more confident in the application… but it’s also sort of like in the movie, how the character is becoming more and more ‘ghost!’ It ended up working narratively too. So again, there are just all these kinds of fun things that happen by letting go.”

Ohs believes that technological advancements have put the future right into any independent creator’s hands. Many modern cameras, including Ohs’ own decade-old Canon 5D Mark III, are capable of turning out silver-screen quality work. And the emergence of portable tools like LED lights has enabled filmmakers to do more with a lot less.

“Because filmmaking is becoming so accessible, I think it can actually become more similar to… music, or even painting?” muses Ohs. “Because everything was just so financially fluid I could more, freely, on a whim — just paint a painting. A movie is no longer necessarily a product that needs to make money in order to support itself, and so instead of being made for consumers, we can now just make them for the artists, for the creatives…to me, it almost feels like film is moving into a new phase of its art form.

“I think the best advice for independents that I’ve heard is to really just go make things. Anyone that wants to make a movie nowadays can make a movie, and should go make a movie… you know, with this technology, we can make things we like for the experience rather than the reward. It’s like everyone has a paintbrush now.”

You Hurt My Feelings – first-look review

SpongeBob SquarePants: The Cosmic Shake Review: F.U.N. for All