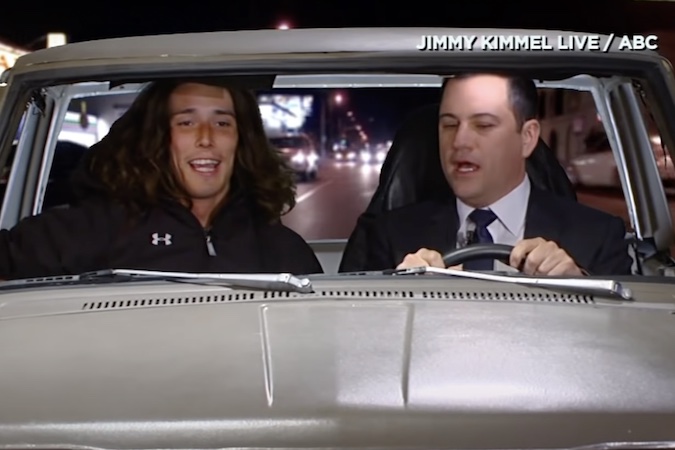 The Hatchet Wielding Hitchhiker, the stunning new Netflix documentary, tells the story of Caleb “Kai” McGillvary, a hitchhiker who struck a deranged motorist with a hatchet three times to stop him from assaulting innocent people. The incident led to McGillvary becoming a viral sensation, and, at the peak of his fame, appearing on Jimmy Kimmel Live. If you were curious to see that appearance in its entirety, you can check it out above.

The full video is especially captivating if you’ve seen The Hatchet Wielding Hitchhiker, which quickly jumped to No. 1 on Netflix this week. It includes a short interview with Jessob Reisbeck, the Fresno sports reporter who discovered Kai, that is not seen in the documentary, and the Kimmel clips takes on a strange weight when you know — as documentary viewers do but Kimmel viewers didn’t — that Kai had just been interviewed by Fresno police about the Feb. 1, 2013 hatchet incident immediately before the broadcast.

He doesn’t appear at all shaken by his recent interaction with the police. Also, Kai provides an explanation — never shared in the film — for why he was carrying a hatchet in the first place.

Also Read: Bill Nighy Has a Charming Way of Shutting Down Personal Questions

“I was trying to do this really cool ass treehouse with willow hooks and I was gonna make a dreamcatcher out of it and put wood planks on the floor and then have another little hoop above, with the chains dangling down beneath that one, to the the tree so I could drape tarps across that, and on the inside, have like some bedsheets with moss in there for insulation,” he told Kimmel. “You could put like a crab trap there inside of a hot water tank heater, right?”

Kimmel asked: “You’re gonna do all that with a hatchet? What is this some magical hatchet that you wave and contractors appear?”

The Jimmy Kimmel Live taping took place barely a week after McGillivary repeatedly struck Jett McBride. McBridge had picked up a hitchhiking McGillvary and they had smoked a marijuana cigarette together before McBride slammed his vehicle into a road crew from the PG&E electric company, then got out of his car and attacked a woman while making racist statements and claiming he was Jesus Christ. It was then that Kai struck him with the hatchet, repeatedly — as he later recounted to Reisbeck in a news report that quickly went viral.

McBride’s attorney Scott Baly has responded to MovieMaker and clarified that despite what the documentary says, McBride was found not guilty by reason of insanity at his trial for hitting and injuring the utility worker.

As the The Hatchet Wielding Hitchhiker notes, Kimmel was the peak of McGillvary’s fame, and things soon fell apart. Three months after he was hailed as a hero, prosecutors say, he killed New Jersey attorney, Joseph Galfy, who McGillvary says twice sexually assaulted him. McGillvary is currently serving a 57-year-prison sentence in the  murder.

Prosecutors challenged McGillvary’s sexual assault accusation, noting that by his own admission he willingly spent time with Galfy the night after he alleges he was first assaulted.

McBride, meanwhile, was found insane at the time of the attack and ordered to receive treatment at a California mental hospital.

The Hatchet Wielding Hitchhiker is now streaming on Netflix.