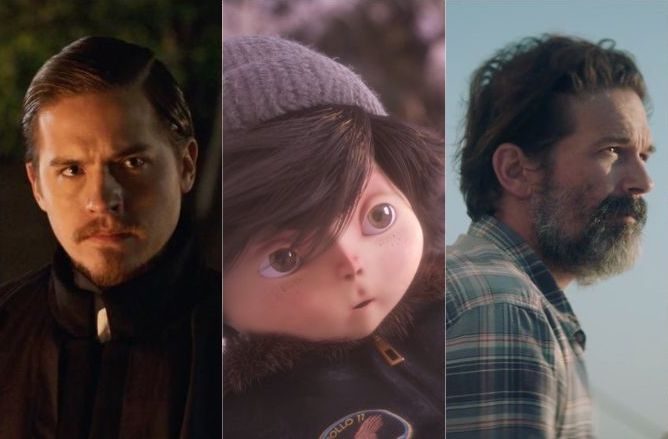 Lonely Wolf International Film Festival #22LWIFF received a record number of submissions in 2022: 1,804, with more women at the directorial helm than ever before, according to CEO & Founder Adrian Perez. “The male:female ratio (70:30) is slowly balancing itself compared to what it was during our earlier days in 2020 (90:10). This shows progress and we’re thrilled.”

Only 67 total audiovisual projects (3.7%) were officially selected and virtually exhibited over the festival’s 10-days (December 23-31, 2022). The 9th season of the festival fascinated its jury thanks to a recurrence in the usage of specific symbology, spatial dimensionality and coloration; some independent auteurs from different corners of the globe gravitated towards a joint thematic intersection of mechanical asphyxia at the hands of psychotic denial and delusional projection. Complex inner turmoil depicted within the claustrophobic interiors of automobiles, basements and even a helmet or breathing mask. A generation of filmmakers breathing new meanings of cognitive defense into all sorts of headgear within tales set in current day dystopia. These mutual cinematographic deployments are sparking a new wave and inspired the curation of unique film blocks, one titled “Collisions and Dead Ends in Confined Spaces.”

The paid media campaign behind this season’s festival trailer (available to watch here) reached 639,743 people, of which the virtual festival enjoyed 2,261 official attendees in free ticket sales and 8,138 total film streams for the duration of the film festival.

Among the most-watched titles was the award-sweeper of the season Midday Black Midnight Blue (USA) with its 5 wins and a further 3 nominations, directed by Samantha Soule and Daniel Talbott, produced by Lovell Holder, starring Chris Stack, Merritt Wever, Samantha Soule and Will Pullen, all nominated for their leading and supporting performances, with the latter two winning in their respective award categories.

Deliverance (Hong Kong), directed by Kelvin Shum, was another highly praised film this season that stood out in the crowded landscape of modern cinema; the film tells the story of a fractured family struggling to come to terms with its mother’s passing, and explores the use of hypnosis to reconnect with the past. Shum has masterful control over the film, creating a cohesive and emotionally resonant narrative with great storytelling, breathtaking mise-en-scène, and masterful direction.

The Sitges-acclaimed Unheimlich (Mexico), directed by Fabio Colonna, drew many viewers, and plenty of the live-action and CGI sci-fi award contenders of the season were amongst the top five most-watched daily, with The Eye: Calathek (USA), directed by Aaron Sims, Distance – Act I: The Peacock And The Sphinx (Canada), directed by Eddy Loukil, WhatKilledTimmyBenson (Netherlands), directed by Nick Cremers, Transfert (France), directed by Jonathan Degrelle, and Anomaly (Indonesia), directed by Brian Tan, all dominating.

Another selected title to spark discussion was The Duel (USA), directed by Justin Matthews, for its star casting of Dylan Sprouse, also nominated for his leading role.

One of the biggest awards of the season, the Outstanding Contribution To Independent Filmmaking Award, went to Elly Yae Li Cho. The Eclipse: Recognized By The Sound and Sum (Republic of Korea) are two differing, highly-exhibited, multi-award winning audiovisual canvases that share Cho’s artistic imprint for subtextual richness, narrative silence, experimental and poetic hysteria. Sum is Cho’s most complex canvas yet, both on a logistical and psychoanalytic front, ever soothing to watch with its captivating and dreamy, yet biblical declaration on personal freedom and existentialism. The Eclipse: Recognized By The Sound, pushes beyond a declaration to an academic text worthy of study and deconstruction. Cho’s most transgressive of the two art films, for its trauma-focused psychotherapy via the hands of visual storytelling, its defragmented narratology shows Dziga Vertov’s very life-caught-unawares theorem as it replicates real psychogenic amnesia and recurring depersonalization. Cho’s artistic DNA imprint merges both a beauty and trauma for life, and Cho finds sanctuary in untouched natural ecosystems and is a true mental health advocator Cho is one of the most talented and innovative film directors of this generation.

Guide On (USA), directed by Paige Compton, proved a short film can have a simple plot and clear message, masterful direction, brim with emotion, and be exciting and inspiring in equal parts. Much credit goes to its Hollywood scenography and the character depth of Halle Varro, played by the plethoric Shawntelle Lee, who, under the direction of Compton, manages to bring out her full potential and clearly has a bright future in the film industry.

Once Upon A Time Tonino Delli Colli (Italy), directed by Paolo Mancini and Claveriano Salizzato, who not only showcase Delli Colli’s stunning work, but also delve into the details of his career and the impact he had on the film industry. Delli Colli’s work is nothing short of artistic genius, with every frame of the film feels like a subtextual, poetic masterpiece. The way he captures light and emotion on screen is simply breathtaking. The directors’ research and attention to detail in presenting this thesis is evident and adds depth and richness to a magical documentary.

Blind Truth (USA), directed by Laura Burnett with a masterful equilibrium of tension-building, character depth and vulnerability, and to top it all off, impeccable performances. An impressive short thriller demonstrates Laura Burnett’s extraordinary talent as a director.

Languishing (USA), directed by Mike Mytnick, exhibits a cohesive and immersive world, with Mytnick’s creative imprint all over it from experimental aesthetics and its many bold and innovative approaches to visual storytelling. Mytnick is not afraid to take risks, and that’s what makes him such a compelling director. Languishing‘s a powerful reflection on the global feeling of isolation and uncertainty many of have experienced in recent years.

Hindi Mama (Taiwan), directed by Wei Yang Chen, proves to be a micro-short film with exuberant potential. Chen displays a strong understanding of pacing and how to keep the viewer engaged, and his use of visuals and sound design is impressive for such a short film. With a little more experience and practice, he has the potential to join the ranks of the elite in the film industry.

ZomB&B and Misery Man (USA), both written by Harrison Myles with his dark comedy imprints present throughout. Making the top shortlists, these are sure-bet scripts for their commercial appeal, especially ZomB&B, for its bright and diverse ensemble of lead protagonists, and many thrills and scares; it’s the zombiepocalypse hysteria we’ve come to love, like in Marc Forster’s World War Z (2013), merged with a masterclass in multi-strand narrative storytelling and character depth that marks James Cameron’s Avatar: The Way Of Water (2022). Misery Man is a different level of poetic hysteria, regret and psychopathology, unlike anything ever written, about a kind man who loses his way in the brink of success.

Shooter On The Grassy Knoll (USA), written by a true veteran in the multi award-winning James Schlicker, received second place for Best Historical Drama, and the top shortlists for Best Thriller and Best Feature Screenplay. A compelling thematic exploration into relapsing psychosis (schizophrenia), dementia praecox and inferiority complex that reveals a fascinating character arc behind the sniper responsible for President Kennedy’s death. A sure investment that’s on the RED LIST.