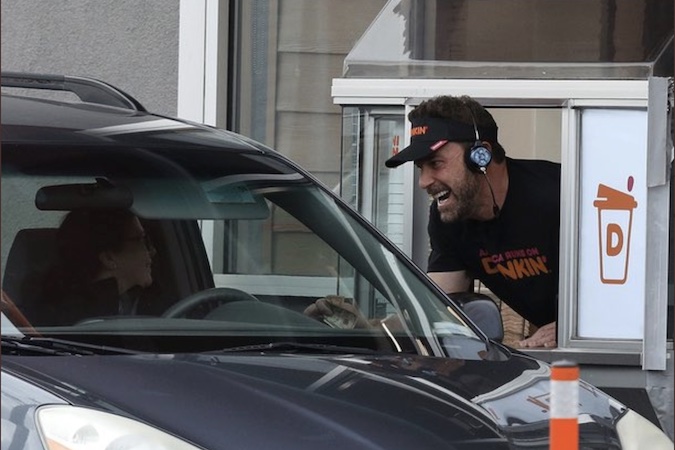 MediaU: As a producer and executive, Adam Leipzig has worked on films from Dead Poets Society to March of the Penguins. He’s also hired a lot of people and has noticed two things: 1. He never asks where they went to school and 2. Many film students can’t find jobs in the industry. Those two observations contributed to his founding of MediaU, a new (mostly) online program to teach the film business. Starting today, you can watch some of their videos on our YouTube channel for free, or get $100 off a class called The Marketing and Distribution Roadmap for Independent Filmmakers using discount code Moviemaker011123.

Golden Globes: Last night’s show was pretty outstanding once you realized that host Jerrod Carmichael genuinely didn’t care about ever coming back again and was going to go scorched earth on lots of A-listers. After starting the show by saying he got the job because the HFPA needed a Black host to improve its image, he went all in on Will Smith, Tom Cruise, and even the venue, calling the Beverly Hilton “the hotel that killed Whitney Houston.” Many objected. I thought his joke about Cruise/Scientology was the most brutal, for reasons that are a little complicated to explain in a pithy newsletter format. So I wrote about the whole thing here.

P.S.: This morning I woke up to find this rather intense video in MovieMaker‘s Twitter replies to the Carmichael-Cruise story.

OK Cool But Who Won: Like everyone who has ever watched the Golden Globes, I immediately forgot most of the awards. But The Banshees of Inisherin did really well,  winning best comedy or musical film, best screenplay for writer-director Martin McDonagh, and best comedy actor for Colin Farrell, who graciously heaped praise on Ana de Armas for her excellent (and just SAG nominated!) performance in the much-maligned Blonde. One reason the Globes are so hard to remember/take seriously is the splitting up of categories into comedy/musical and drama. I would call Inisherin a drama more than a comedy, personally. But best drama went to Steven Spielberg’s The Fabelmans. Here are all of the winnners.

May I Editorialize More? There’s been a lot of talk about whether the Golden Globes could scrape their way back into respectability after last year, when their shady dealings and lack of diversity got them boycotted and pulled from NBC. Last night suggested a way forward, though maybe not the one the Hollywood Foreign Press Association wants: It was an award show where the host spent much of the show roasting the HFPA and the show itself. Not affectionately. It would be darkly fun for the Golden Globes to turn into a grim parody of The Oscars, and with last night’s show, they were getting there. Entertaining show, is what I’m saying.

Sundance Judges: If you have a film at Sundance and want to start sending cakes and knishes to the judges, their names have just been announced. They are Jeremy O. Harris, Eliza Hittman, and Marlee Matlin for the U.S. Dramatic Competition; W. Kamau Bell, Ramona Diaz, and Carla Gutierrez for  the U.S. Documentary Competition; Shozo Ichiyama, Annemarie Jacir, and Funa Maduka for the World Cinema Dramatic Competition; Karim Amer, Petra Costa, and Alexander Nanau for the World Cinema Documentary Competition; Madeleine Olnek for the NEXT competition section; and Destin Daniel Cretton, Marie-Louise Khondji, and Deborah Stratman for the Short Film Program Competition. Also, folks, just kidding, please do not send them baked goods. It’s cold in Park City and they prefer mittens.

Also: The jury for the Alfred P. Sloan Feature Film Prize is Dr. Heather Berlin, Jim Gaffigan, Dr. Mandë Holford, Shalini Kantayya, and Lydia Dean Pilcher. They deliberated in advance of the Festival and awarded the Prize to The Pod Generation, directed by Sophie Barthes.

Bob Odenkirk Returns: Already? I thought we’d have to wait a long time for his return to TV after the smashing creative success of Better Call Saul (which lost in its Golden Globes category to House of the Dragon, which is absurd, but I digress) — but his new show, Lucky Hank, will arrive March 19.

More Colin Farrell: It’s great to see him getting props for the lovely Banshees of Inisherin, but there was a time, not so long ago, when he thought his career was over. After 2004’s Alexander whimpered at the box office and received belittling reviews, he went into a kind of hiding, he told The Hollywood Reporter: “I went to Lake Tahoe to a ski resort. I didn’t ski, but I realized I could wear a mask and a beanie, and I did that for three days. And then after that, yeah, I did question. I went, ‘I’m just shite at it. I’m a crap actor. I’ve been found out.’”

Ben Affleck Returns: To his Massachusetts roots, that is. He was seen serving coffee and donuts at a Medford, Mass., Dunkin Donuts near Boston, reportedly for a commercial. As fans of wholesome tabloid photography are well aware, the Cambridge native is a frequent purveyor of L.A.’s Dunkin Donuts establishments, so at least we know he believes in the product. Also: His wife Jennifer Lopez joined in to support him in this whole thing. He’s still Benny from the block.

MediaU Part Deux: Here’s part of my lengthy chat with Adam Leipzig, which covers everything from how dozens of “informational” interviews finally landed him a job at Disney just as it was reinventing itself in the ’80s; what he learned from Jeffrey Katzenberg; and his memories of Robin Williams, a star he says was exactly the same onscreen and off.