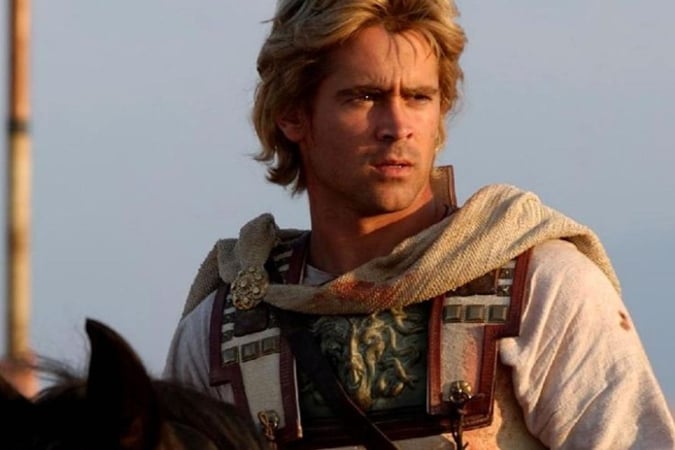 It was a rude awakening for Farrell, who played the title character, and his fellow castmates — which included Angelina Jolie, Anthony Hopkins, Christopher Plummer, Val Kilmer, Jared Leto, and Rosario Dawson — when they realized that they wouldn’t be needing any fancy evening wear for awards season.

“Expectation is a dangerous thing. Alexander was a story that Oliver Stone had dreamed of since he was in college. So, as grand as it was, as global as it was, as political as it was, as thrilling as it was, as violent as it was, and as sensual as it was, it was really personal — to Oliver and to me. It took us six months to shoot, on three continents. It was incredible. When I say ‘expectation,’ we all had our tuxedos ready [for awards shows]. I’m not even joking. We were all like, “Right, lads, we’re off to the Oscars. This is a sure thing.” And then it came out. The reviews came out, and I remember someone going, ‘Oh God, it’s not good.’ And my publicist going, ‘It’s really not good,’” Farrell said at The Hollywood Reporter‘s recent Actor Roundtable.

“I was like, “Well, what do you mean ‘not good’?” There wasn’t any Rotten Tomatoes then, so they had all the printed reviews, and one after another was telling me to pack my bags, I’d been found out: ‘Alexander the Dull,’ ‘Alexander the Boring,’ ‘Alexander the Inarticulate,’ ‘Alexander the Weak.’ I was like, ‘Holy shit.’ I thought, ‘What can I do?’ I felt so much shame. I found myself in a place where with everyone I met I wanted to say, ‘Have you seen Alexander? If you have, I’m really sorry.’ I’m not even joking. I wasn’t going to give them their $20 million back, but…” he joked.

Faced with a harsh reality, Farrell decided to lay low for a few days to let it all blow over.

“I went to Lake Tahoe to a ski resort. I didn’t ski, but I realized I could wear a mask and a beanie, and I did that for three days. And then after that, yeah, I did question. I went, ‘I’m just shite at it. I’m a crap actor. I’ve been found out.’ I came blazing onto the scene with a bit of moxie and a bit of Irish this and that — ‘F—, I don’t give a shit about it!’ I was 23. When you’re 23 and you actually care a lot, and you don’t know how to articulate that or have a relationship with that care, the easiest thing to do is to say you ‘don’t give a shit.’ This is not to apologize — I was a young man — but Alexander really made me go, ‘I don’t know,’” Farrell said.

So, he decided to go back to his creative roots.

“What I had to do was plug back into the Colin that went into an acting class when he was 17. And not only the fellow that went in the first time, but more importantly the fellow that went back for the second workshop. I had lost that. I was shot out of the cannon, as you said. I was given so much opportunity. It was insane how much money I was given, the keys to this, the keys to that. And that’s why, when I heard years ago that Justin Bieber threw eggs at his neighbor, I was like, ‘He deserves a medal if that’s all he’s doing.’ He raced a car on Ocean Drive? I’m like, ‘If that’s all he’s doing, that kid is trying the best he can to be a good human being.’ So anyway, it’s been an interesting trip. And I was fortunate enough to be given the opportunity to reconnect with the simplicity that should never leave the core of what we do.”