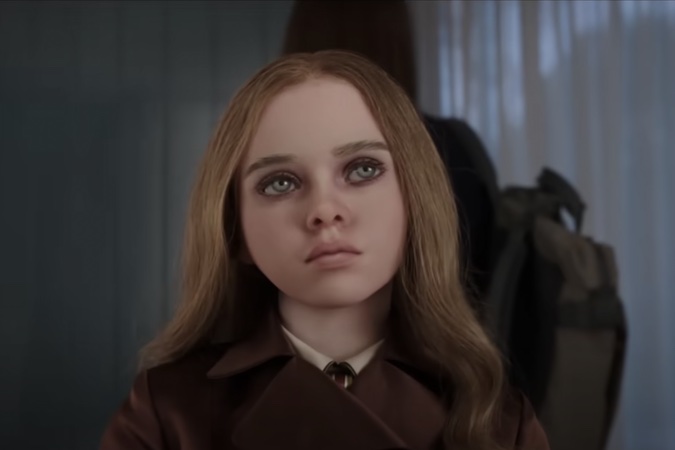 M3gan may be a sign of good things to come; Martin Scorsese loved sinking in TÁR; how Glass Onion is both easy and impossible to predict. Plus: WILD CINEMA. All in today’s Movie News Rundown.

Out Today: M3gan, a killer robot doll movie I cannot wait to see.

Let’s Talk Glass Onion: On the latest Low Key podcast, we talk about how I knew way back on September 8, long before I saw Glass Onion, who the killer is. It’s incredibly obvious really. You can listen on Apple or wherever you get your podcasts or here:

Great and Unproduced: Scott Foster, co-founder ScreenHop, wrote this piece for us about one of the greatest unproduced scripts of all time, Harrow Alley, which diabolically tells us as much with what it leaves out as with what it leaves in. Screenwriter Walter Newman — who earned an Oscar nomination for 1951’s deliciously cynical Ace in the Hole — seems to have followed a manta of “show, don’t tell — but sometimes also don’t show.” Foster also shares his exchange with Emma Thompson that makes him confident that she will finally be the one to successfully bring Harrow Alley to the screen. Harrow Alley is about a 17th century plague ravaging London.

More M3Gan: It has a 95 on Rotten Tomatoes, folks. That’s better than Women Talking, The Fabelmans, Glass Onion, or Avatar: The Way of Water. It is not as good as The Banshees of Inisherin, which I also highly recommend.

Christian Action: The creator of the new faith-based action series Guardians wrote for us about the challenges of filming action scenes that a Christian audience would be OK with. He worked in close consultation with the streaming service PureFlix, which will air Guardians starting next week.

Additional M3gan: Rotten Tomatoes says M3gan “leans into its ridiculous premise” and folks, I wish there was anything ridiculous about it. It’s not a big leap to imagine kids going from being raised by tablets and Netflix to being raised by “protector” dolls. There will come a time when M3gan seems quaint. Does no one else see the irony of an algorithm-driven review aggregation site denying the viability of an AI doll?

Scorsese on TÁR: Martin Scorsese had high praise for Todd Fields’ (excellent) TÁR, Fields’ first film in 16 years and third film overall, at the New York Film Critics Circle awards. “For so long now, so many of us see films that pretty much let us know where they’re going. I mean, they take us by the hand, and even if it’s disturbing at times, sort of comfort us along the way that it will be all OK by the end,” Scorsese said. “Now this is insidious, as one can get lulled into this, and ultimately get used to it. Leading those of us who’ve experienced cinema in the past — as much more than that— to become despairing of the future of the art form, especially for younger generations. … But that’s on dark days. The clouds lifted when I experienced Todd’s film, TÁR. What you’ve done, Todd, is that the very fabric of the movie you created doesn’t allow this. All the aspects of cinema and the film that you’ve used, attest to this. The shift in locations, for example, the shift in locations alone does what cinema does best, which is to reduce space and time to what they are, which is nothing.”

Beyond Film: Sundance has announced that the lineup for its Beyond Film conversations will include Barry Jenkins (producer of this year’s Sundance film All Dirt Roads Taste of Salt), Dakota Johnson, Jonathan Majors (Magazine Dreams), Randall Park (Shortcomings), Ruth Reichl (Food and Country), and Adrian Tomine (Shortcomings). They will also include Marlee Matlin, one of the stars of Best Picture winner CODA, which debuted at Sundance last year and is getting an encore.

Upon Further Consideration of M3gan: It feels like where at what one Glass Onion character might call an “infraction point” between traditional, safe movies (the usual Oscar bait) and movies that just absolutely go for it, without fear of reprisal from arbiters of good taste. Recent movies I’d put in the latter category include Cocaine Bear. There’s also a genre of what I’d call Wild Cinema, of movies that are uncontainable while also artistically great — think Annette, Tár and Red Rocket. I’m writing this during a time of year when I watch a lot of screeners for very tasteful, well-intentioned, socially acceptable and boring movies. I’d rather watch a tasteless, evil horror movie.

Wild Cinema: I’ve Googled this phrase and don’t think it’s a thing. Yet.

To Quote the Great Film Critic @PaulineKaelBot: “I don’t trust anyone who doesn’t admit having at some time in his life enjoyed trashy American movies; I don’t trust any of the tastes of people who were born with such good taste that they didn’t need to find their way through trash.” And also: “The place for goodness is in life, not on the screen.” Yes, I follow something called @PaulineKaelBot on Twitter. Tell me again about M3gan‘s “ridiculous premise”?

Tom Hanks on Nepotism: The actor tells Reuters there’s nothing wrong with several members of his family working in the industry: “Look this is a family business. This is what we’ve been doing forever. It’s what all of our kids grew up in,” he said. “If we were a plumbing supply business or if we ran the florist shop down the street, the whole family would be putting in time at some point, even if it was just inventory at the end of the year.”

May I Editorialize?: I love the crew-cutted, cantankerous Hanks of this interview, selling the hell out of his new movie A Man Called Otto, and defending his famous family. Also: An aside, but I think Chet Hanks is a real talent. The dude has a mix of vulnerability and volatility that make him extremely watchable. There’s absolutely no reason he should be online interacting with the people, much less responding to his internet critics, yet he constantly does, and I think that’s fascinating and says something about his discomfort accepting the easy route. Somewhere in his bundle of contradictions and miscalculations I see grit and character. He could make some great Wild Cinema on the way to becoming the next Mark Wahlberg.

Have a Great Weekend: If you haven’t seen them, can I recommend home viewing of Banshees of Inisherin or TÁR?

Take Me To The River: New Orleans

Does Knock At The Cabin Have A Post-Credits Scene?