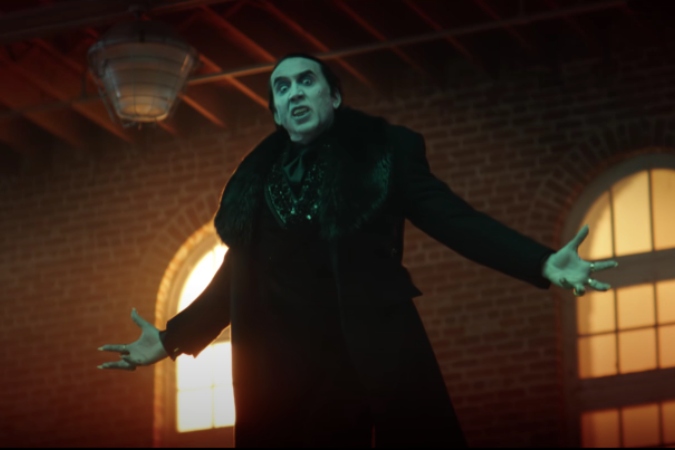 Nicholas Cage and Nicholas Hoult face-off in the new Renfield trailer; You can now try The Menu‘s “just a well-made cheeseburger” in real-life; Seven Jeremy Renner movies worth watching this weekend. All in today’s Movie News Rundown.

Great Jeremy Renner Movies: If you’ve been sending well-wishes to Renner telepathically as he heals from his horrific snow plow accident, then you may enjoy this list of seven great non-Marvel movies he stars in.

Speaking of Marvel: Dave Bautista is done with the MCU and on to more dramatic roles. The actor, who stars in next month’s Knock at the Cabin from M. Night Shyamalan, recently spoke about how glad he is to be saying goodbye to his role as Drax the Destroyer (even though he has fond memories). The third Guardians of the Galaxy film is out in May, and will apparently be Bautista’s last.

Renfield Trailer: Nicholas Cage is putting his Vampire’s Kiss experience to good use, playing Dracula in Chris McKay’s new Renfield. The horror-comedy follows the vampire’s henchman, Renfield, played by Nicholas Hoult. In the book version of Dracula, Renfield eats flies. Not sure if that’s going to be a part of Hoult’s character, but he looks like a pretty normal guy at a support group for horrible bosses in the trailer, which you can watch below.

Hugh Jackman’s Plea: The Greatest Showman actor knows he has a year of filming alongside Ryan Reynolds coming up as they shoot new Deadpool and Wolverine movies, and he is begging the Academy not to stroke Reynolds’ ego with a nomination for best song. Jackman made a joke video on Twitter saying as much, after he learned that Reynolds’ song “Good Afternoon” from his Christmas movie Spirited with Will Ferrell and Octavia Spencer had been shortlisted for an Oscar nomination. “Please, from the bottom of my heart, do not validate Ryan Reynolds in this way,” Jackman deadpanned. Watch the video below.

But don’t get me wrong … pic.twitter.com/8ymOYUOq9m

Last-Minute Sundance Additions: We’re gearing up for Sundance later this month (so excited for the first in-person festival since 2020) and the festival has just announced some last-minute additions. They include sports doc Stephen Curry: Underrated; Beyond Utopia; Earth Mama; Flora and Son, and Past Lives. There will also be re-screenings of some favorites from 2022 and 2021, including Oscar Best Picture winner CODA, as well as Navalny, Klondike, and Summer of Soul.

Just a Well-Made Cheeseburger: The dish at the heart of The Menu, starring Anya Taylor-Joy and Ralph Fiennes, is now on the menu at Irv’s Burgers in West Hollywood. The “Just a Well-Made Cheeseburger For You” will be available to order until the end of this month, according to Variety. The burger includes Irv’s sesame bun, two 3 oz. beef patties, American cheese, pickles, onions, and special sauce, with a side of crinkle-cut fries — and all for the very reasonable price of $9.95, considering the neighborhood it’s located in.

Emma Thompson’s Broken Heart: Emma Thompson and Colin Farrell had a nice little chat together for Vanity Fair, and in their conversation, Thompson revealed that watching Farrell’s performance in Martin McDonagh’s The Banshees of Inisherin broke her heart. “I’m watching you in Banshees — Oh God, it broke my heart. It just broke my heart in two, just this heart, this sort of little heart walking around, completely vulnerable and nothing to protect it at all, really,” Thompson said. “And then so suddenly being punched, like watching Brendan [Gleeson]’s character literally punch you right in your heart. It’s so painful.” Farrell plays a kindly Irishman whose best friend unceremoniously breaks up with him