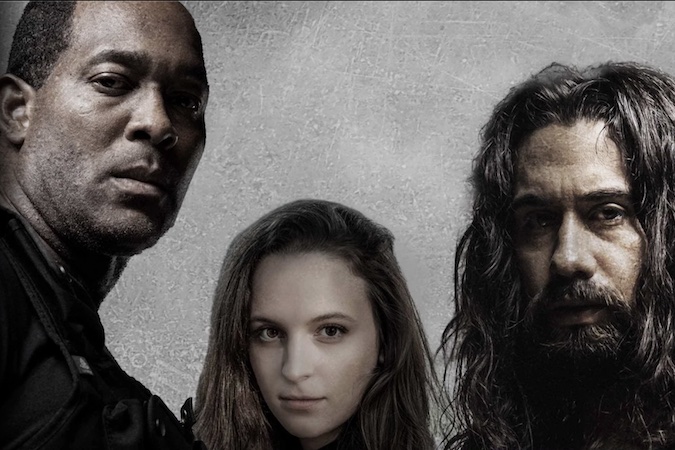 Chason Laing is the creator, writer and director of the upcoming faith-based action series Guardians, about a group of guardian angels struggling with the rigors of the job. Charles W. Bush produced the project. In this piece, they talk about avoiding the cliches of many faith-based films and TV shows, problem-solving, shooting Christian action scenes, and the importance of collaboration.

Chason Laing: Faith-based films are often characterized by churchy dialogue, predictable romances, low stakes, and a come-to-Jesus moment usually underneath a giant oak tree. Guardians, a five-episode action/thriller series I created that will be released soon, has none of those things.

The Christian streaming service PureFlix approached me early in 2022 to discuss the creation of a new original series, one that branched away from these typical tropes to attract new subscribers to their platform. Guardians, and several other new programs, will be a litmus test to determine if the faith-based audience will support a different style of story telling.

To mitigate the risk of this endeavor, I had to work within some constraints when developing Guardians. First, it would have a micro budget. PureFlix, a subsidiary of Sony, is well aware that trying new things with established audiences is not always well-received — even experiments have to make financial sense. My second constraint would be a truncated production schedule, which also meant filming during the height of the Texas summer — something I had sworn I would never do again. But the most difficult challenge was filming action and violence in a way that would be acceptable to faith-based audiences.

I wrote the script to include set pieces I could access by begging, borrowing, or bartering. I limited the cast and gathered a micro crew, rotating volunteers and PAs – my wife even helped feed everyone. We shot with one camera, and when I say “we,” I mean “me.” I was my own DP. Did I mention we had a small crew?

But the biggest way I was able to pull this off within the budget was by getting people excited about the project. Most of the actors, crew, and stunt performers worked for significantly reduced rates — or even volunteered — because the project excited them. Guardians is the kind of project they would watch. They wanted to be a part of breaking the mold, so they were willing to work hard for the show, even when I was unable to offer them what they truly deserved.

The five-episode series was shot in seventeen days with no days off. I do not recommend this. Several of the leads were not local, some actors were committed to other projects, and in the end, the only way we could film everything we needed was by fitting the entire production into this short window, hell or high water. But again I was amazed that everyone worked through the hardships to make the project happen. It was truly an illustration of having a group of amazing people come together under one banner to make something extraordinary.

One of our primary locations was an empty five-story building that had no air conditioning. Because it was 100+ degrees every single day, we  drank water and Gatorade by the case. We paused frequently for breaks and to let the camera cool down so it wouldn’t overheat. Despite the heat, everyone gave it their all, even while grappling through sweat-drenched action sequences, until the perfect take was called.

Action and violence in faith-based films is a very tricky line to walk. For starters, what could be considered “too far” is subjective and will vary greatly among the audience. Secondly, as mentioned before, this is pretty new territory, so there is just not much data for what is acceptable in this genre. I worked directly with PureFlix, episode by episode, beginning with the scripts. By discussing potentially hazardous scenes before production began, I was able to plan ahead and get creative with how to show these parts in the story using direct insights from PureFlix on what sorts of things had worked well on the platform — and what things to shy away from. When post production began, I ran the completed scenes by PureFlix again, before picture lock, to make sure I was doing everything possible to succeed with its audience. Using PureFlix’s data and insights, we were able to bend (without breaking) the rules, and film sequences in a way not typically seen in faith-based films.

Having constraints may feel suffocating at first, but it can be very freeing if you use constraints to foster creativity. Finding the right people, actors and crew alike, makes all the difference in the world on the final outcome of your project. Guardians would be nothing if it were not for all the amazing people involved and their tremendous sacrifices. Finally, always bring things back to your audience. If you are working hard to put them first and to create something that is designed just for them, they won’t let you down. We’re betting on it.

Charles W. Bush: As a producer over the past decade, I have become well aware of the challenges of independent filmmakers. From funding and resources to a lack of qualified crew members, a project could be negatively affected if these aren’t properly addressed. My goal is always to be an asset in any way that I possibly can for independent filmmakers. I met Chason Laing at a festival in New York four years ago, and we connected with the goal of working on a project together — if the opportunity ever arose, and the right project was on the table.

Upon connecting to work on Guardians, I realized that Chason, much like me, is accustomed to moving quickly and very independently. My goal was to plug any holes in production and assist however I could. One of the biggest needs he expressed was for a solid 1st Assistant Director. I referred Sheran Goodspeed Keyton, and she was a great fit. The biggest lesson I learned working with Chason is the ability to move very quickly and nail the shot every time. He is a strong visionary and walks onto the set knowing exactly what he wants to capture. The biggest lesson that I would personally pass along to any local filmmakers and producers is not to shy away from working collaboratively with other filmmakers and producers. If there is a project that is clearly the right project and you can be an asset to one another, on any level, seize the moment. For us, this project happened to be the right one!

Kenny Omega, Rahul Kohli Have Cameos in Like a Dragon: Ishin

How to recognise your fundamental needs in a relationship – Film Daily