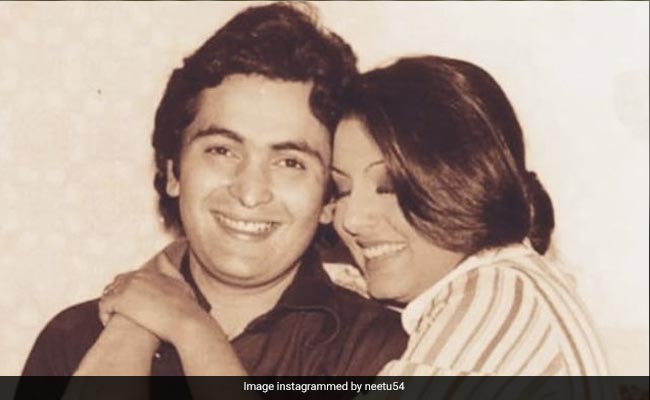 Let us all remember the OG chocolate boy Rishi Kapoor on his 69th birth anniversary. The actor died on April 30 last year after a two-year battle with cancer. To mark the day, Rishi Kapoor’s wife, actress Neetu Kapoor wrote a heartwarming note for “Kapoor Saab”. She recalled his treatment days in New York and how Rishi Kapoor taught her to be “strong” and “value each day”. “I learnt a lot from Rishi Ji during our last few traumatic years in NYC…How we celebrated when his blood counts were high…We dined, shopped and laughed…In his lows, we just stayed home…Watched TV and ordered amazing food…And still had some wonderful moments in hope that in the next round of chemotherapy, he would be better…Hope and being strong is what he taught me…Value each day…We all miss him today. I can picture how excited he would have been for his 69th birthday. I am sure he is celebrating with his family up there. Happy birthday, Kapoor Saab.”

Take a look at the photo here:

On several occasions, we have seen Neetu Kapoor pulling out some unseen frames from her family album remembering her husband. Today, let’s take a look at some of those pictures:

Neetu Kapoor loves to share stills from Rishi Kapoor’s films and this picture is proof. It is from the song Parda Hai Parda fromthemovie Amar Akbar Anthony. The movie featured the star couple.

This beautiful photo was shared by Neetu Kapoor on Rishi Kapoor’s first death anniversary. A part of her note read, “Not a day has gone by when we have not discussed or reminisced him as he was an extension of our existence.”

Now, we have a picture coming straight from their wedding album. Aren’t they looking beautiful?

This one is our favourite. It features the two twining in shades of blue.

Rishi Kapoor and Neetu Kapoor always had each other’s back. This snap is from their younger days together.

It is no secret that Rishi Kapoor was full of liveliness. The moment was captured while he celebrated the festival of colours with his co-stars.

This is an adorable throwback featuring Rishi Kapoor and his son Ranbir Kapoor. It was clicked on the sets of Prem Granth. We can see the little Ranbir with the clapboard.

The last one is special. We see the much-in-love couple having a great time together. Along with the major throwback, Neetu Kapoor wrote, “1989 Jaipur. Toosh…shawl…sweater…winter. Post 10 pm, eyes shut…By the look of it, he definitely had sum thing funny to say.”

Bollywood’s Chintu Ji in his career spanning five decades had given some of his best performances in films such as Agneepath, Bobby, Karz, Prem Grant.